Weddings are the celebrations of the union of two people who decide to spend their life together and be there for each other, in sickness and health. The ritual of cutting the cake during the wedding reception has a very profound meaning. Traditionally, wedding cakes were known to bring good luck to the couple and guests. Nowadays, the wedding cake designs have evolved a lot and they have become more of a centerpiece for the wedding. Over the centuries, many traditions are formed surrounding the cake that still holds great importance for weddings. Read further to know some amazing and popular wedding cake traditions around the world. 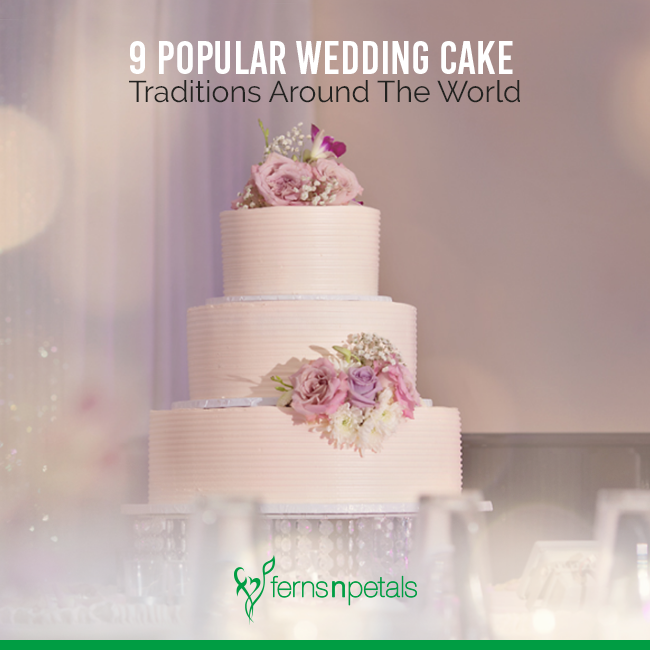 1. Saving The Top Layer Of The Cake

In old times, couples used to freeze the top layer of their wedding cake and save it for their first child’s christening. It was feasible in the olden times, as married couples had children much earlier than couples do today.

2. Cutting The Cake Together

Cake cutting is an important event for a wedding. Slicing the cake together is considered the first task that newlyweds do together. Hence, it is of great significance. In old times, the bride cuts the cake alone during weddings as a symbol of losing her virginity. But as the cakes got bigger, it became tough for the bride to do it alone, so she’d take the help of her newlywed husband.

3. Bride & Groom Feeding Each Other

During the cake cutting ceremony, the bride and groom feed each other a small bite of cake, which symbolizes an act of commitment to keep showering love and affection and be there for each other.

By the 17th century, the wedding cakes were made in pairs- the bride’s cake and the groom’s cake, which was a small fruitcake. But the broom’s cake was not served at the reception. It was cut up, packaged, and given to guests as a wedding favour. This tradition died out in the UK after some time, but it came back to the U.S more recently. The groom’s cakes are not fruitcakes anymore, but they are more creative now.

In the old days, people thought the white wedding cakes symbolize virginity. But the reality is that the icing is made of sugar, which is white. As times passed, the white icing became a status symbol. The icing of the cake got its name ‘royal icing’ from Queen Victoria & Prince Albert’s wedding cake in 1804, which was decorated in white.

Traditionally, wedding cakes had up to seven tiers. In medieval times, spiced buns were stacked in a giant pile. It was believed if the newlyweds could kiss over the tower of pastries, they’d be in for a lifetime of prosperity. As wedding desserts shifted from buns to cake, the several tiers of cakes lost their importance.

7. Sleeping With A Piece Of Cake

It was believed that a girl sleeping with a piece of wedding cake under her pillow will dream of her future partner that night. The custom dates back almost 300 years.

Earlier, there was the custom of baking charms into wedding cakes, which is not followed anymore. Each charm had a specific meaning. Like, heart meant true love, a ring meant upcoming engagement, and horseshoe meant good luck. Similarly, purse meant good fortune and wedding bells meant marriage.

In ancient Rome, the groom would smash the wedding cake on the bride’s head. The tradition was done to symbolize male dominance and encourage fertility. The guests would rush in to scoop up the crumbs of the smashed cake for their good and fertility.

Some of these wedding cake traditions have disappeared over the years while others are still in trend.