Do You Know About Snake Plant Benefits?

The Snake plant is a species of flowering plants in the family Asparagaceae that is popularly known by a quirky name ‘Mother-in-Law’s Tongue.’ The plant is known so because of its evergreen sword-shaped leaves. The Snake plant is also known as the ‘viper's bowstring hemp’ as it is one of the sources of plant fibers used to make bowstrings. It is recommended by NASA as one of the best plants for improving indoor air quality that absorbs harmful pollutants from the atmosphere. The low-maintenance and durability of this strikingly beautiful plant makes it an excellent choice for homes and offices. 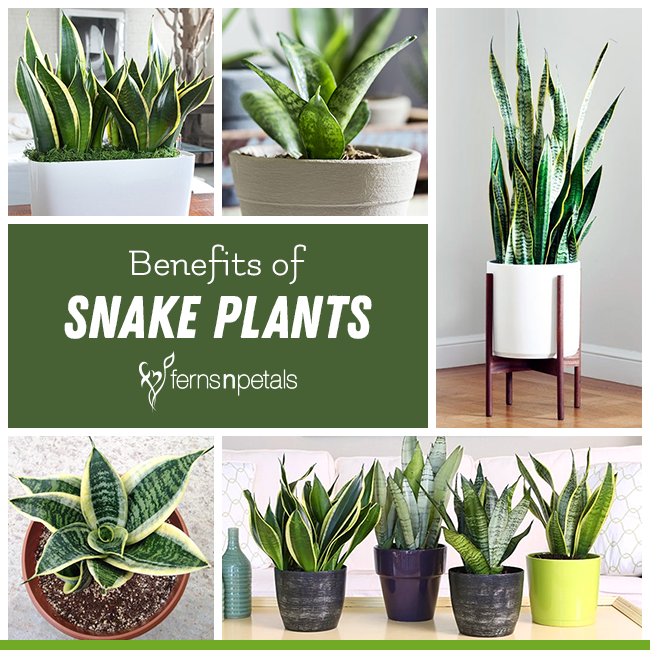 It is a Natural Air Purifier

The Snake plant filters toxins from the air such as toluene, formaldehyde, carbon monoxide, trichloroethylene and xylene by absorbing them. It is the perfect and affordable alternative to expensive air purifiers. The Snake plant purifies the air in the homes and offices and helps promote happy vibes, thereby reducing stress, increasing productivity and enhancing the overall well-being of the inhabitants.

Most plants take in oxygen and release carbon dioxide during the night. But the Snake plant converts a great amount of carbon dioxide to oxygen at night which makes it an ideal bedroom plant. According to research, one can easily survive in an air sealed room that has 6-8 Snake plants.

The Snake plant releases moisture in the air and reduces airborne allergies like sneezing, coughing, itching eyes and watering eyes. It is a natural remedy for staying healthy for people who are prone to allergies. The sick building syndrome (SBS) is a condition that affects people who reside in a building with poor indoor air quality. Some of the common symptoms include dizziness, nausea, fatigue, nose, ear and throat irritation, muscle ache and even lack of concentration. Keeping the Snake plant in the bedroom and offices is a great remedy for SBS by absorbing toxins from the air and releasing pure oxygen.

The Snake plant helps absorb harmful radiation which is emitted by electronic devices like television, air conditioner, microwave, laptops, Wi-Fi routers, etc. These radiations have harmful effects on the human body and can cause cancer and cardiovascular diseases. Therefore, it is advised to keep the Snake plant in the living room or other areas of the house which have electronic devices to maintain a healthy and protective environment.

Improves the Quality of Sleep

The Snake plant detoxifies the indoor air and supplies rich oxygen at night that helps improve the quality of sleep. It reduces several issues that arise due to poor air quality in the house like headaches, eye irritation and respiratory problems. When placed in the bedroom, it encourages deep sleep at night and leaves one feeling relaxed and rejuvenated in the morning that further enhances productivity.

According to Feng Shui, the spiky plants are considered great to drive away negative energies. When placed in an ideal position, the Snake plant is known to bring protective and positive energy in homes and offices. As this plant is considered quite aggressive, therefore, it should be placed in less-trafficked areas. The Southeastern, Southern and Eastern corners of the homes and offices are considered best to place the Snake plant.

The Snake plant is one of the most tolerant and low maintenance plants that can survive even if neglected for weeks. It takes up little space and can be placed anywhere in the bedroom, living area or study room. It can survive in poor light conditions even if not watered for weeks and exhales a great amount of oxygen.

This perfect indoor plant not only enhances the beauty of the surroundings but reduces several health risks as well. Adding this plant to home or offices will allow people to live a healthy and stress-free life.